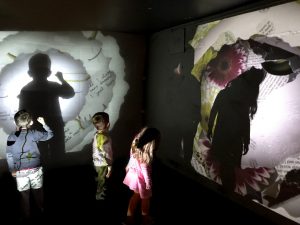 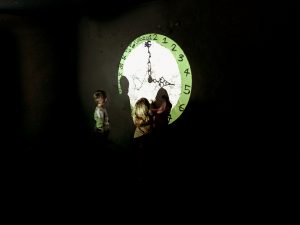 Elina Karadzhova is an Edinburgh based, Bulgarian born, visual artist and a researcher who is interested in the capacity of art to give shape and tangibility to our inner worlds and to what cannot be simply articulated by words.Her long-term project explores through visual arts the experience of living in-between languages. Elina is interested in the bi/multilingual personality as a collage of languages and in the last several years she has been exploring this phenomenon through art-based participatory research. She uses the medium of film and moving images installations as mediators and facilitators between research and our lived experiences. Her art practice as a researcher and an artist is focused on languages and their impact on our sense of belonging, memory and identity. The medium of moving images fascinates her not only as an artistic outcome, but also as a process, as a collaborative practice. She sees it as an opportunity for encounters and as a research method in its own terms. Elina uses creative practice as a tool of generating data and exploring what it is like to live in-between languages. For more details about Elina’s work please visit: www.elinakaradzhova.com

The installation is based on materials created by sixty bi/multilingual children between 6 and 15-year-old during art workshops, which aimed to explore through creative activities ‘what is like to live in-between languages’. The objective of the workshops was to make the children analyse their linguistic experiences, which they may be taking for granted, since they are growing up as bi/multilingual and the boundaries between switching from one language to another seem blurrier in comparison with bi/multilingual adults. The workshops explored three themes: languages & time, languages & dreams and languages & avatars.

The children created clocks with annotations, in order to map out their daily linguistic pattern and experiences in a visual way and what activities are related to the change/switch of language. The second theme studied the relationship between what languages we speak and in what languages we dream. The third theme, languages & avatars, asked the children to re-imagine language as a persona/character or an object.  This exploration aimed to give language a completely different quality, to give it a shape and re-think language in an unconventional way through a creative process.

The moving images installation was entirely based on visuals created by the children. It aimed to showcase the magical world of languages by presenting the data in a visionary way. The exhibition had 2 components – a projection installation and a physical display of children’s creations.

This project is part III of a long term ongoing research through creative practice. The first part included collaboration with 34 bi/multilingual adults as my participants. The method used to generate visual, audible and textual data was – cultural probe kits. The research culminated in a moving images installation ‘The Liminal Space’ based on 4 projectors creating immersive experience for the viewer.

For the second part of the project I created an experimental short film ‘Liminality II’. The film is inspired by the same 34 participants’ data. The focus of the film is the oscillating sense of belonging that the participants share, which is triggered by the ‘movement’ from one place to another and from one language/s to another. As a result one cannot define where they belong to.

More about the project can be found at: https://www.elinakaradzhova.com/languages