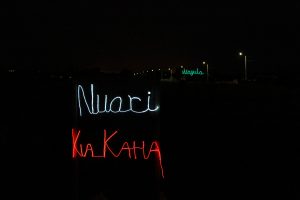 Linda Persson with Wongatha women Geraldine and Luxie Hogarth with parts of the community of Leonora, Desert of Eastern Goldfields Australia

My practice is research based and I often work collaboratively with a range of disciplines to expand methodologies. In Dec 2018 I finalised two major durational & collaborative projects: one in Western Australia desert with a group of women of the Wongatha clan and especially with Geraldine Hogarth and her mother Luxie Redmond Hogarth. This was commissioned as part of Spaced 3 IAS, which culminated in exhibiting my biggest to date installation produced for the Momentum Biennial 2017 & participating in a large group exhibition at the Art Gallery of Western Australia 2018/19. Secondly I just finished a long-term project with Experimental Heritage, led by archaeologist Dr Bodil Petersson through geological landscapes Sweden/Ireland. I used 16mm film & mould-making to investigate myths & current superstition around a ‘Witch Island’- Blue Maiden that was selected for Visions at the Nunnery/Tina Keane 2018. I am interested in female knowledge and indigenous people’s knowledge as a tool to understand different paths of colonialism, survival & languages by being proactive & to do things done ‘by hand’ or observing through listening, used to question the patriarchal narratives of Western history in which our concepts of the past & future are socially & culturally entwined. This takes shape through clay, various recordings & extensive embodied fieldwork.

The Light and Language project took place in a remote community in the Western Australia Goldfields desert area. For over 2 years intermittently, I was working with the local community to try and tease out the cultural heritage and mother tongue languages through the layers of historical events. This included work with the traditional owners of the land: Tjupan, Ngalia, Wongatha people, as well as the first and second wave immigrants: Greek, Italian, Scandinavian, Slavic, Baltic arriving in Australia throughout colonialism, gold rush and more recent times. It is a complicated situation through the harsh history and alteration of a land so full of recent colonial and environmental scars throughout the landscape. I wanted to use ideas around languages via light and darkness, sun and water- elements that are related to both desert environs and Scandinavian environ with an attempt to make something ‘invisible’ visible, language as landscape. Over 100 local members both from the white community and the Aboriginal people’s community attended, which is a huge number in such a small place. I introduced bendable LED lights that can either be powered by solar cell or AA batteries that were made into local words, conglomerate, traditional and meaningful words chosen and spelled by the mixed community. This was displayed for one night only across three roads linking the ancient site of the Dingo Dreaming, the old gold mine village and the new small town of Leonora.

ABC TV channel came out to film it:

Further information about the project can be found at the website: